The Lies of Abortion

Pregnant women today are alive because their mothers chose life. And they still have plenty of freedom to choose — to choose when and with whom to have sex, and whether to use birth control. For those who point to rape or to teens who are victims of incest, every one of those women have to deal with severe trauma, and all of us should have tremendous compassion on them. But it is a lie from the pit of hell that killing the resulting child — who had nothing to do with the circumstances of his or her conception, and who is innocent, defenseless, and alive — will heal the wounds suffered by the mother. It will only compound them.

Nate Jackson, "On Roe: The Unbridled Hypocrisy of 'Good Catholics' Biden and Pelosi"

Email ThisBlogThis!Share to TwitterShare to FacebookShare to Pinterest
Labels: Abortion

The Moral Idiocy of Gun Control

Gun control isn’t about stopping gun violence, but disavowing moral responsibility for preventing it, passing the buck to the cops, to society, and to some force outside our control. Gun control rallies are the virtue signaling of moral cowards seeking to blame someone else for horrors that they cannot cope with and that they do not intend to take any personal action to prevent.

Disarmament, national or personal, is not a moral stance, but the abandonment of morality.

The female body is a powerful thing. Anyone in advertising knows this. The mere sight of Bathsheba coupled with David’s failure to walk away and control his thoughts changed the course not only of King David’s life but the lives of countless others. Young women are shown early and often how to harness their sexuality, but too few are told to guard their body and their heart. Too few are told the truth about the physical and emotional toll of casual sex.

Our daughters deserve a mother and a father in their home and a host of adults in their life who tell them and show them women are to be treated with respect. Women who do not treat themselves with respect do not demand others do so; women have been told for decades they can and should have casual sex and they can and should fear no consequences, even and especially if a child is a consequence. Countering this damaging rhetoric is incredibly difficult for the increasingly rare parent who is swimming against the cultural tide.

Anna Ziegler, “The Party That Wants To Pay For Moms To Put Their Babies In Daycare Now Supports Breastfeeding.”

Email ThisBlogThis!Share to TwitterShare to FacebookShare to Pinterest
Labels: Womanhood 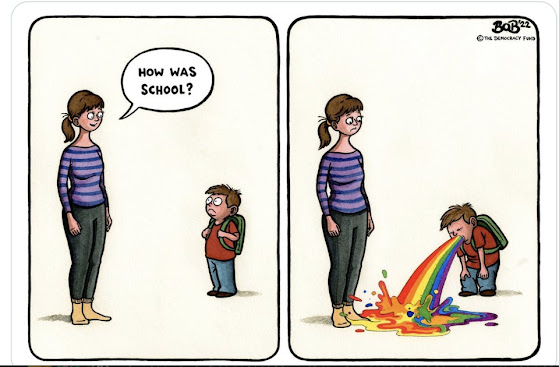 The Evil of the Democrat Party

No one can speak of evil without mentioning its attraction to the Democrat Party, which is now the party of official racism in America.  Political evil is a contagion of psychological immaturity, self-delusion, and counterfeit justification, and its virus has spread throughout America's liberal ruling class.  Its influence has scoured our nation of its fundamental values, and leftists are intent on creating a state apparatus that facilitates the separation of children from their parents, criminals from justice, and citizens from the Bill of Rights.  This is a call to Marxist socialism that has no past and no possibility of a future.  This is evil come to do business with the Democrat Party, and it is evil on a national scale.  Civilization must protect the weakest, but leftist ideology targets and crushes those who are unable to resist the powerful forces of state coercion.  There is no civilization on the far side of Marxism.

Phillip Ahlrich, “Liberalism and the Problem of Evil”

Email ThisBlogThis!Share to TwitterShare to FacebookShare to Pinterest
Labels: Democrats

How Are Progressives Made?

How are progressives made? By cooking them in a public school six hours a day, five days a week where they are seemingly indoctrinated with an ideology that contradicts the values and beliefs of many of their parents.

Email ThisBlogThis!Share to TwitterShare to FacebookShare to Pinterest
Labels: Liberalism

The Design vs Use For Sex

The design for sex, ordained by the Creator Himself since the dawn of Earth in Eden, is that it belongs in marriage alone in a covenant between one man and one woman until death. Only in that context can sex be what God intended: a mutual self-sacrificing that is complete, unconditional, faithful, and ultimately fruitful. Although subduing the ground and bringing children into the world became painful with man’s rebellion, the aim of marriage and sex remained: “Be fruitful and multiply.” But oh, how we’ve strayed.

None are so hopelessly enslaved as those who falsely believe they are free. The truth has been kept from the depth of their minds by masters who rule them with lies. They feed them on falsehoods till wrong looks like right in their eyes.

Posted by Glenn E. Chatfield at 7:23 AM No comments:

Why the USA Is Degenerating

It is only when the people become ignorant and corrupt, when they degenerate into a populace, that they are incapable of exercising their sovereignty.

Posted by Glenn E. Chatfield at 5:57 PM No comments:

Email ThisBlogThis!Share to TwitterShare to FacebookShare to Pinterest
Labels: Culture

Sexuality itself becomes identity. It becomes associated if not identified with who or what I am. Ultimately, it’s not all about sex. It’s much deeper. The sexual revolution on steroids with which we’re now seeing and was predicted is a symptom of the search for human identity, meaning, and significance, i.e., the quest for what it means to be human. This quest is orphaned when we kill God, and anything goes in His place. The existential quest is always a quest for “God,” but the “God” many seek is one made in man’s image.

Cory Miller, Is it Really All About Sex?

We have had our last chance. If we do not devise some greater and more equitable system, Armageddon will be at our door. The problem is theological and involves a spiritual recrudescence and improvement of human character that will synchronize with our almost matchless advance in science, art, literature, and all material and cultural developments of the past 2,000 years. It must be of the spirit if we are to save the flesh.

Gen. Douglas MacArthur, radio broadcast to Americans from the site of the 9/2/45 surrender ceremony in Tokyo Bay, Japan.

Posted by Glenn E. Chatfield at 7:26 AM No comments:

Maybe we should start a Dignity Month, 30 days in which we encourage people to have some. Couple that with Accomplishment Month and all the rest of them can go the way of Joe Biden’s functioning brain. That’s not really fair, Joe Biden never had a fully functioning brain, but you get the idea.

Derek Hunter, “Screw ‘Pride’ And Every Other Month”